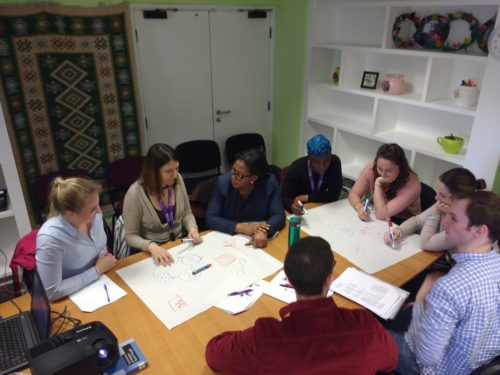 Earlier this year, law students at Birkbeck School of Law, University of London took part in a public legal education (PLE) module that culminated in them devising and delivering workshops for service users and volunteers at Hibiscus Initiatives. Hibiscus Initiatives was set up to empower Black, minority ethnic and refugee migrant groups serving a custodial sentence, or released into the community.

Law for Life has run the module successfully for three years, however this is the first time a live community teaching element was included into the programme.

Teaching PLE to law students is useful for all parties involved. For students such as myself, we learn things that would not otherwise be taught on a standard law degree. It forms an innovative addition to a qualifying law degree course – the focus on real-life legal problems like housing, immigration and employment matters show the law in a more realistic light. The problem of the lack of access to justice is something that a law student would not usually become aware of until they practice and, even then, this is highly dependent on what area of law they eventually choose to specialise in.

The workshop assignment piloted this year offered us the opportunity to actually meet PLE service users and understand their problems, as well as a chance to teach some of the valuable legal skills that we had learned over time.

For service users and participants, the workshops are also very valuable. They remove the disconnect between the lay person and the ‘lawyer’. Although we are not formally trained, our background is quite law-heavy, and much of our training for the workshop focused on being able to simplify and relay information in a digestible, practical way that need not seem as intimidating – a valuable skill.

In the long term, PLE courses at universities should greatly benefit service users and the sector as a whole; a greater number of students should become aware of PLE and the problems it aims to address and, ideally, more future lawyers would come into the fold as a result.

We underwent a lot of training in the weeks leading up to the workshop. In addition to the history of the PLE movement, we had been learning about housing, employment and immigration law, and had taken part in a workshop aimed at developing a teaching strategy. Eventually, a plan was devised for an afternoon class focusing on the difference between civil and criminal law, rights and obligations, paying court fines and how to deal with debt. The class was to be a mixture of talks, Q&As and group activities.

The event turned out to be very successful. We started with a ‘draw the law’ activity, where participants form groups and attempt to draw their impression of the law. Results from this were interesting, and largely consisted of negative imagery such as handcuffs, suggesting a pessimistic impression of the law. This led into a discussion of each group’s drawings, where participants were encouraged to explain their work and open up about their perceptions of law.

The talks and Q&A sessions followed, which were very dynamic and interactive – participants took the opportunity to ask questions and share their experiences with the law, whilst students had the opportunity to understand real problems facing people in everyday scenarios and impart some of the knowledge we had gained during our studies. Previously muddy areas of law and the legal system were clarified and made more accessible for participants.

Evaluation forms that were filled out by participants immediately after the workshop indicated widespread satisfaction: 100% of users felt that the course helped them to understand basic differences between criminal and civil issues and 83% felt that they now understand how to deal with court fines. Only a third felt that they were now able to identify different sources of advice and legal help available to deal with these fines, which is an area of the workshop that needs improvement. 100% of participants, however, rated the overall training as excellent or good.

These positive results are very encouraging, and Law for Life hope to build on and improve the clinical programme as well as develop their community-based teaching workshops, with help and support from Hibiscus Initiatives.